The Story Behind the Able Archers Dedications – Part One

I dedicated The Able Archers to the memory of three men who were instrumental in preventing an escalation to world war in the fall of 1983.

This blog will focus on General Charles L. Donnelly, Jr.  I’ll cover the other two gentlemen in subsequent blog posts.  General Donnelly was a great mentor to me.  I worked for him for about two years when he was the dual-hatted commander of United States Forces, Japan, and Fifth Air Force.  General Donnelly was a combat pilot and deep thinker about the use of airpower in modern warfare.  He was a brilliant user of intelligence.  I had the pleasure of providing him an intelligence briefing nearly every morning during the years I worked for him.

Most importantly, I saw him in action first-hand during the crisis caused by the Soviet shootdown of Korean Air Lines flight 007 on the first of September 1983.  His outstanding leadership and cool judgment were instrumental in preventing a shooting war with the Soviets during those fraught first few days of September 1983. 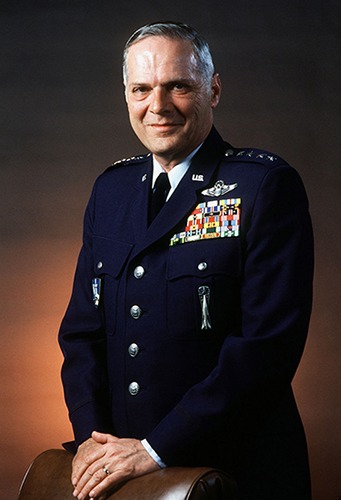 ‘Chuck’ Donnelly was a quintessential airman.  I recall being on the flight line with him at Kadena Air Base on Okinawa, the home of an F-15 fighter wing.  It was a beautiful sunny day with brilliantly clear skies.  I made the rather obvious observation that it was a great day to fly as we watched F-15s take off.  General Donnelly put his hand on my shoulder and said, “Brian, every day is a beautiful day when you’re flying an F-15.”.

As a measure of our relationship, General Donnelly personally promoted me to first lieutenant, captain, and major.  He ‘frocked’ me as a captain (which means he pinned on the rank before my actual promotion date) because he wanted me to wear captain’s bars for an important briefing I was to present on his behalf.  His reasoning was that the audience, which included a couple of four-star officers, would take me more seriously if I briefed wearing captain’s bars.  I’m sure he was correct.

When I decided to resign from the Air Force rather than pursue a full career, General Donnelly was serving as the commander of all US and NATO Air Forces in Europe.  During one of his visits to the Pentagon from his headquarters in Germany, General Donnelly took me out to lunch in the Pentagon’s flag officers mess and did his best to talk me out of my decision to leave active duty.  Although I didn’t change my mind, I greatly appreciated his concern and kindness.

After he retired, I hired General Donnelly as a consultant at the research firm where I worked.  This gave us an opportunity to work and travel together again, which I enjoyed tremendously, and I think he did too.  Chuck Donnelly died far too young at age sixty-four.  I’ll always remember him as a creative commander, a generous mentor, and a great friend.  I miss him greatly.