The Story Behind The Able Archers Dedications – Part Three

This is the third and final blog post on the men to whom I dedicated The Able Archers. Each was responsible in an important way for preventing an escalation to world war in the fall of 1983.

This blog post will focus on Lieutenant General Leonard H. Perroots, Sr., who was responsible for defusing the third and final crisis, which could have led to a general nuclear war between NATO and the USSR. The last crisis was precipitated by NATO’s nuclear exercise Able Archer 83. 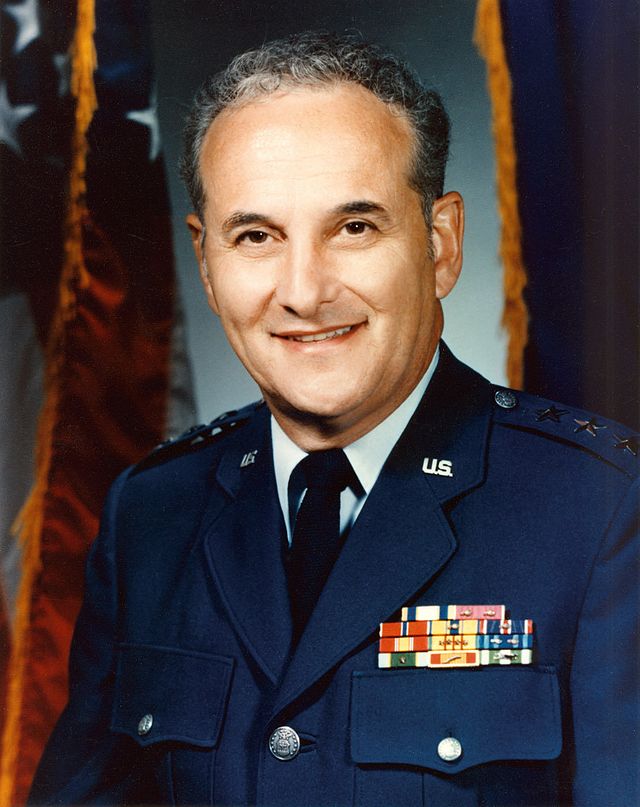 (pictured here as a Lieutenant General, Director of the Defense Intelligence Agency)

General Perroots was born in 1933 in Morgantown, West Virginia, the son of Italian immigrants. His father was a stonemason. Graduating from his hometown school – West Virginia University – Perroots became a career Air Force Intelligence officer. He was famous in the Intelligence Community as a tremendously gifted and very funny briefer. Known universally as ‘Lenny’, he was an immaculate dresser. In addition to his humorous side, he possessed a keen, analytical mind.

When General Perroots was chief of Air Force Intelligence in the Pentagon, I worked for him as a morning intelligence briefer for the Air Force Chief of Staff and the Air Force Council. I was a very young captain at the time and Lenny loved to tease me, saying that I looked like I was still in high school. He’d kid around and tell me to “not get too cocky”. While working for him, I observed another side of General Perroots – sober and deeply analytical. This contrasted with Lenny’s high-energy, fast-talking, and witty persona when speaking in front of large audiences.

In the fall of 1983, he was a one-star general and the senior intelligence officer at US Air Forces Europe, Headquarters at Ramstein Airbase in West Germany. He’d been at Ramstein since 1980 and was very knowledgeable about Soviet operations in Eastern Europe. His years spent observing the Soviets across the inner-German border had prepared him well for the Able Archer 83 crisis.

NATO’s Able Archer 83 exercise kicked off on 1 November 1983. It was a large-scale nuclear war drill designed to test the alliance’s command and control structure, and it included unusual elements – the loading of nuclear warheads, reports of ‘nuclear strikes’, strict communications security, and a countdown to ‘general alert’ – that supported the Soviets’ confirmation bias about a potential NATO nuclear first strike. Considering the extreme tension pervading US-Soviet relations in the fall of 1983, the timing of Able Archer 83 was awful, to put it mildly.

Unknown to General Perroots at the time, the British foreign intelligence service, MI6, had recruited a senior KGB officer as an agent – Oleg Gordievsky. In 1983, Gordievsky warned the British of the Soviet intelligence program ‘Operation RYaN’, which was designed to find indications of a NATO nuclear first strike on the USSR. Gordievsky reported to the British that the Kremlin leadership had an irrational fear of a decapitating nuclear first strike. He also indicated that NATO’s imminent deployment of new nuclear cruise and ballistic missiles seemed to justify the Kremlin’s extreme paranoia, particularly when coupled with the scope and scale of the Able Archer 83 exercise. The British passed along this intelligence to CIA, but it didn’t reach Air Force Intelligence and General Perroots.

In 1989, as General Perroots was about to retire from the Air Force as Director of Defense Intelligence Agency (DIA), he wrote a highly classified ‘end of tour’ report. In it, he detailed his actions during the Able Archer 83 crisis and how the United States and NATO narrowly avoided a nuclear war with the Soviet Union in November 1983. The National Security Archive at George Washington University, which has been instrumental in getting critical documents related to Able Archer 83 released to the public, campaigned for years to have DIA and the State Department declassify the Perroots’ end of tour report. Finally, the State Department released a redacted version of Perroots’ paper in February 2021.

According to his 1989 report, Perroots noted ‘unusual activity’ in the Soviet forces facing NATO in response to Able Archer 83. On 5 November 1983, he reported this to his boss, Air Force four-star General Billy Minter, the commander of US Air Forces, Europe and of all the NATO air forces. General Minter asked Perroots if he recommended that he increase the NATO air forces’ readiness posture in response to the Soviets’ unprecedented preparations for nuclear war. General Perroots advised him to ‘carefully watch the situation’ and not ‘increase real alert posture’. His advice likely prevented a rush to nuclear war.

In his 1989 report, Perroots minces no words. He wasn’t apprised by Washington of critical intelligence and this shortcoming could have led to ‘a potentially disastrous situation’. Lenny Perroots, the intelligence community’s astute and street-savvy court jester, trusted his brain and his gut. Without the full intelligence picture in hand, he made the right call, saving Europe from a cataclysmic nuclear war.

In his report, Perroots acknowledges that had he known the full extent of Soviet war preparations – facts that were withheld from him by the Intelligence Community in Washington – he wasn’t sure whether he would have provided different advice to General Minter. The irony is that a better-informed General Perroots might have advocated for escalation, rather than de-escalation!

For those who want to learn more and the 1983 crises, I recommend the following works of non-fiction: