The Story Behind The Able Archers Dedications – Part Two

This post will continue my discussion of the three men to whom I have dedicated The Able Archers. I covered General Charles Donnelly, Jr., in my last blog post and will address Lieutenant General Leonard Perroots in a future one. Today’s post is about Lieutenant Colonel Stanislav Petrov – the ‘man who saved the world’. 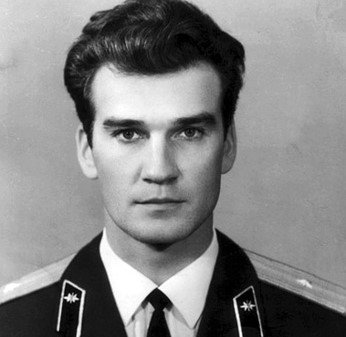 Lieutenant Colonel Stanislav Petrov, Air Defense Forces of the Soviet Union (b. 7 September 1939, d. 17 May 2017), pictured here when he held the rank of major

Unlike Generals Donnelly and Perroots, I never met Colonel Petrov. Stanislav Petrov was born in 1939 in the port city of Vladivostok in the Soviet Far East. His father was a fighter pilot in the Soviet Air Force during the Great Patriotic War (World War Two).

Petrov graduated from the Kiev Higher Engineering Radio-Technical Academy of the Soviet Air Force in 1962. Kiev, the capital city of Ukraine, is some 4,500 air miles from Vladivostok, meaning that Petrov went to college in a city a continent away from home. One can only imagine that a European city like Kiev was quite a culture shock for a young man who grew up in the Far East. Upon graduation from the academy, Petrov was commissioned as an officer in the Soviet Air Defense Forces.

Unlike the United States, the USSR had a separate service dedicated to the air and missile defense of the homeland – the Air Defense Forces. For those who don’t know, the Soviet Union had five services reporting to the Ministry of Defense. The services were: (1) The Strategic Rocket Forces; (2) the Ground Forces; (3) the Air Force; (4) the Air Defense Forces; and (5) the Navy.

We don’t know a great deal about Petrov’s career leading up to the fateful night of 26-27 September 1983, when he found himself unexpectedly on duty at the USSR’s national missile defense center. The regular watch commander was ill that night, and Petrov was called in to take his place on the overnight shift. Events would prove that the world was lucky that Petrov was subbing that night.

Colonel Petrov was an expert in sensor data exploitation. He was one of the officers charged with developing and perfecting algorithms to process the data flowing from the Soviets’ new OKO missile warning satellites. It was the OKO satellites that incorrectly detected multiple nuclear missile launches from Grand Forks Air Force Base in North Dakota in the early morning hours of 27 September 1983 (Moscow time). Petrov’s deep expertise enabled him to assess the launch reports as false alarms and to urge his superiors not to order retaliatory nuclear strikes against the USA.

Had a less savvy officer been commanding the watch, things might have turned out differently. His technical reputation must have instilled confidence in his superiors that Petrov was making the right ‘call’ that night.

Initially, Petrov’s superiors praised him for his actions. Later, he was censured for not accurately recording the event in his commander’s log and for other transgressions of protocol. The real reason for his poor treatment was simply that Petrov revealed that the OKO satellites were not ready for operational use. This revelation would have been damaging to men far senior in rank to Petrov who had declared the satellites operationally ready.

Petrov was made the scapegoat, rather than the hero of the incident. The Soviet leadership kept the facts secret for the rest of the USSR’s existence. Imagine how embarrassing revealing this close call with a global nuclear catastrophe would have been to the Kremlin. Unjustly, Petrov’s professional career was effectively over.

The ‘Petrov incident’ was finally revealed some years after the Soviet Union fell apart. In 1998 retired Soviet General Yuriy Votintsev published a memoir that included a chapter detailing the incident – a chapter the retired general titled ‘The Man Who Saved the World’. When the memoir was translated into several European languages, the fact of the ‘Petrov incident’ became known, especially in Europe.

Late in his life, Petrov received belated honors from several European countries and from the United Nations. A documentary film called “The Man Who Saved the World” was released in 2014. American actor Kevin Costner was involved with the making of the film and he appears briefly with an elderly Petrov in the movie. In the film, Costner and other American actors are seen thanking Petrov for his actions in preventing a general nuclear war.

Despite receiving such recognition, Petrov died a bitter, poor pensioner in a Moscow suburb in 2017.

A few years ago, I was participating in a biotechnology conference in Austin, Texas. One of the speakers began his remarks by commenting on how individual human action can have a major impact on the world. The speaker said, “Let me give you an example of what I’m talking about. Who here tonight knows who Colonel Stanislav Petrov is?” I raised my hand and the speaker asked me to explain Petrov’s story. After I did so, the speaker told the crowd, “So, now you all know how one person can have an enormous impact on the world. Colonel Petrov – the man who saved the world.”.